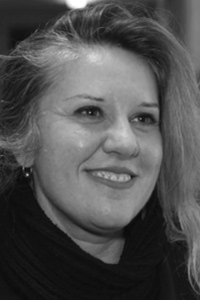 She started engaging early in the cinema, with a long apprenticeship and an important career as an assistant director, that brought her to have a great familiarity with handling the set and a growing passion in acting direction.

She found herself working with various directors, from Stefano Sollima for Romanzo Criminale to Roan Johnson, from Claudio Cupellini to Eros Puglielli, from Ivano de Matteo to Ivan Cotroneo passing by Davide Marengo, but it’s without doubt that for many years she developed the happiest collaboration with Manetti Bros.

It’s with Manetti Bros, in collaboration with Carlo Macchitella, that they produced her debut feature film in 2018: the Ghost thriller “Letto N.6” with Carolina Crescentini.