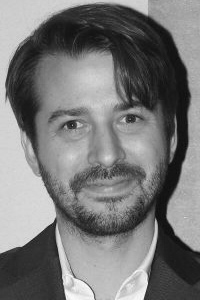 Born in Florence in 1984. Graduated from DAMS at the University of Bologna, with a thesis in filmology on Samuel Fuller, graduated from the two-year master’s degree Officinema-La bottega dei mestieri organized by the Cineteca di Bologna, directed by Giuseppe Bertolucci, specializing in film editing.

In 2010 he wrote and directed the short film Storia di nessuno. The film, which participated in more than 20 festivals around the world, was the only Italian to attend the Los Angeles Film Festival and the European Independent Film Festival in Paris, and was chosen to represent Italy at the 2011 Biennale of Young Artists of the Mediterranean. He has won numerous international awards including the Prix Curts du Polar 2011, award for best short film at the International Festival of Noir in Lyon. In 2011 he also won the twentieth edition of the Iceberg Prize, a historic award announced by the Municipality of Bologna to enhance creative talents.

In 2013 he won the Young Italian filmmaker Prize, organised by the Italian Institute of Culture in New York and the Ministry of Foreign Affairs. In December of the same year, Centoquaranta – La strage dimenticata came out, documentary film on the massacre of Moby Prince, winner of the Toscana Cinema Fund, produced by Pulsemedia. In 2014 the documentary won the Premio Italia Doc at the Bellaria Film Festival.

In 2015 he made the documentary Il paese perduto together with the historian Ernesto Galli della Loggia, talking about an Italy in which they both cannot recognize each other anymore. A journey into the past of the country, strong with the will to find a suggestion for a different future.

In 2018 he wrote the screenplay and directed his first feature-length film, a noir entitled Tutte le mie notti produced by Madeleine Film and Mompracem in collaboration with Rai Cinema.