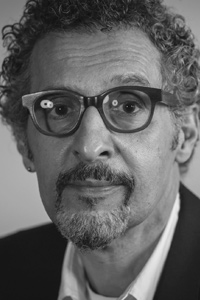 John Turturro 100% New Yorker born in Brooklyn 28 February 1957 and grew up in Queens. While growing up John developed a passion for basketball and boxing. His first wish was to become a professional athlete.

Being confined to bed after an accident which left him with multiple fractures to his leg, Turturro made a scrapbook on his favourite actors and wrote their biographies, by collecting information from newspapers and film magazines. As his interest in recital grew John participated in a small production of ”Pippin”, where his mother and younger brother were the protagonist..

He enrolled in the State University of New York in New Paltz, Turturro chose to specialize in theatre, and after participating in a production of Qualcuno volò sul nido del cuculo, he decided this will be his job for life. After getting his diploma, in 1978, the aspiring actor went to work with his father in a construction company, dedicating all his free time go to auditions and casting.

Before getting his first role as an actor John was a barman, an assistant in a cake shop, and taught history in high school.

In 1980 he was one of sixteen students chosen out of nine hundred candidates to Yale University drama degree course. After graduating from Yale in 1983, he played many rolls as a protagonist in the theatre and started his career as an actor in the cinema. Turturro is married to Katherine Borowitz and has two children, he has in about 70 films. He has almost fixed roles in Spike Lee and fratelli Coen films and has received many acknowledgment also as a director. After the musical Romance & Cigarettes (2006), in 2008 he shot the documentary Sicilia, in which he was led as a spellbound tourist travelling in the palermitano folklore which touched the Vucciria market and the puppet shows. In 2009, he returned to the cinema as an actor in Disastro a Hollywood.

A satire on the Mecca of the cinema directed by Barry Levinson.